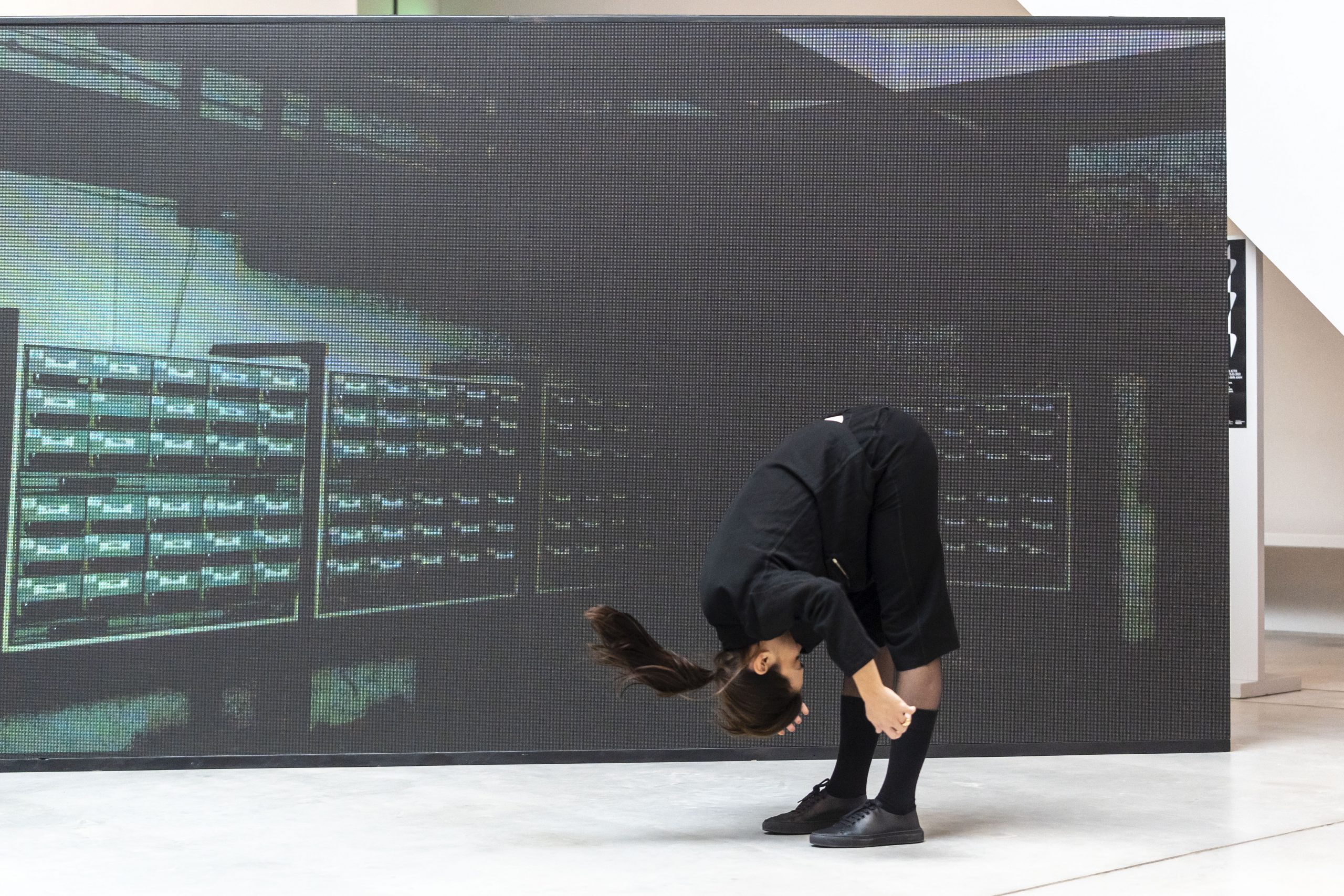 We approach a new journey through insights on dance and performativity enabled by friendship and situated occasions. On December 4 2021, Annamaria Ajmone, a brilliant Italian dancer, artist and dear friend, was invited to cross the space of the Teatrino di Palazzo Grassi in Venice, during the second act of the site-specific exhibition titled Gestus and curated by Video Sound Art. Ajmone investigated the space through three encounters with the public spread throughout Saturday starting at noon. I will re-mediate for my HABITAT series an interview I had the pleasure to have with the artist for this occasion. We spoke about her work, her feelings about dance and ways of collaboration enlightening in particular the alternative infra-structures encouraged by her research processes.

Laura Pante: It was very inspiring to observe the different strategies you adopted during the three performances which, through your movement, gave vitality to the space of the Teatrino. You literally shifted the ways of proximity adopted by the public.

Annamaria Ajmone: After some reflections, I decided together with the curators to interact by relating to the macro-design of the space and the setting without making any changes in terms of “scene,” and without seeking a direct interaction with a specific artist among those in the exhibition. Instead, I tried to give the possibility to the different languages proposed by the works, such as materials, shapes, videos and sounds, to overlap with the dance and to be invested by an atmosphere crossed by different configurations of proximity of the audience. 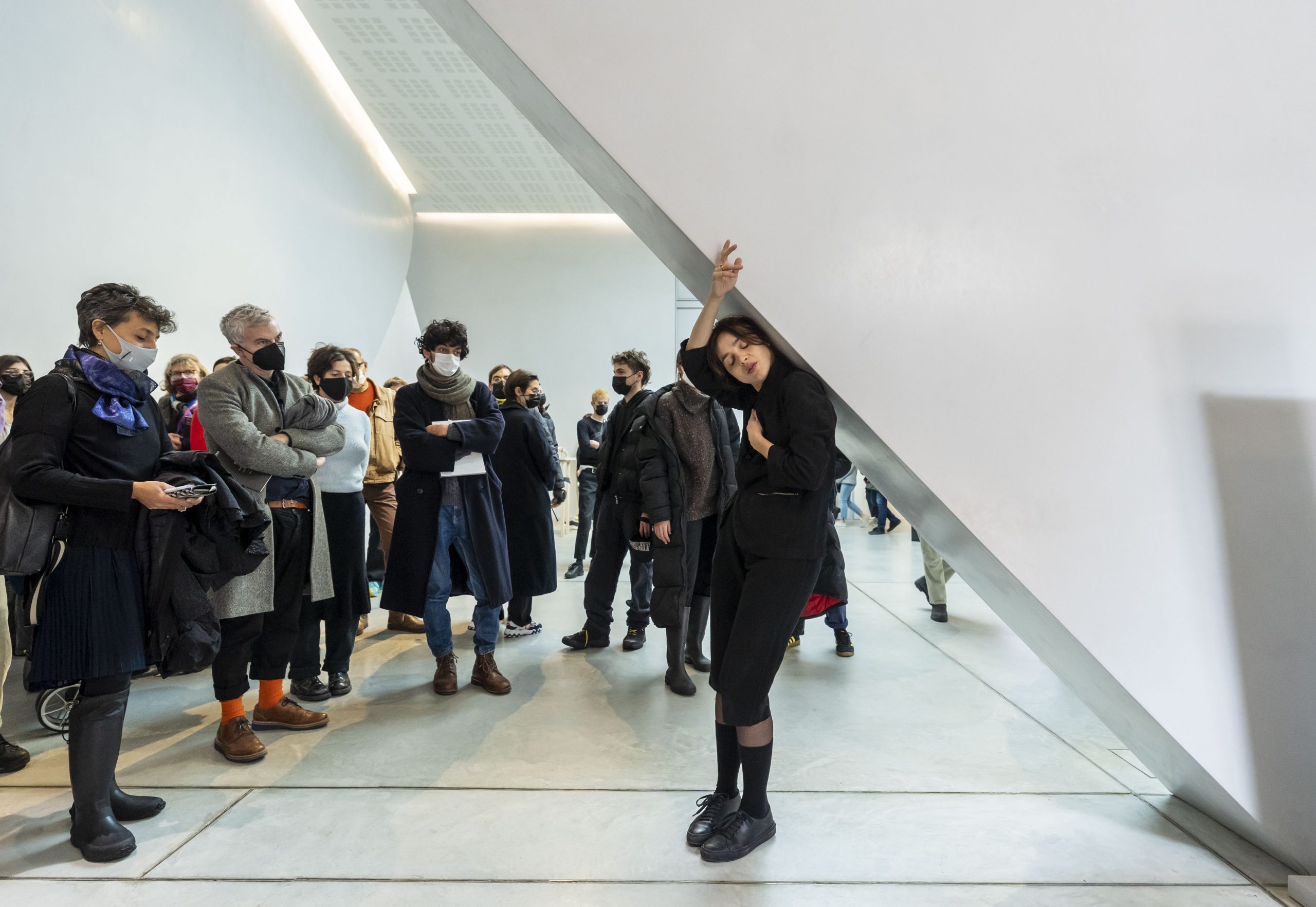 LP: And what about your collaboration with the fashion designer Fabio Quaranta?

AA: During the preparation of the project, I decided to use an outfit not only related to the technology of movement, and to work with someone who would take care of its construction and conceptualization. So, almost by chance, I started talking to Fabio Quaranta, a designer based in Milan, who I knew teaches at the MA in Fashion and Visual Arts at the Iuav University in Venice. His interaction gave a specific contribution to the dance. We worked together in his studio trying on different things in movement, until we created a set of choices with the aim of balancing and containing the idea of a dress that would be an “accomplice” of the dances. We chose two main garments, one black and one white, and I’ll tell you about the third in between later. All three changes are very consistent with my idea of a unitary and connected performance. I really like the refined detail of the pantyhose, an ornament that reveals an alternative structure, in the same way that I try to crystallize gestures during simultaneous composition. And then the special detail… a kind of beautiful black sneakers with a very smooth, black sole! When I wore them they immediately reminded me of some of Yvonne Rainer’s images. I was surprisingly influenced by them, during the three encounters some of my movements seemed to remotely come from that archive of postmodern memories. Funny how memory is embodied and how we activated its residuals, isn’t it? 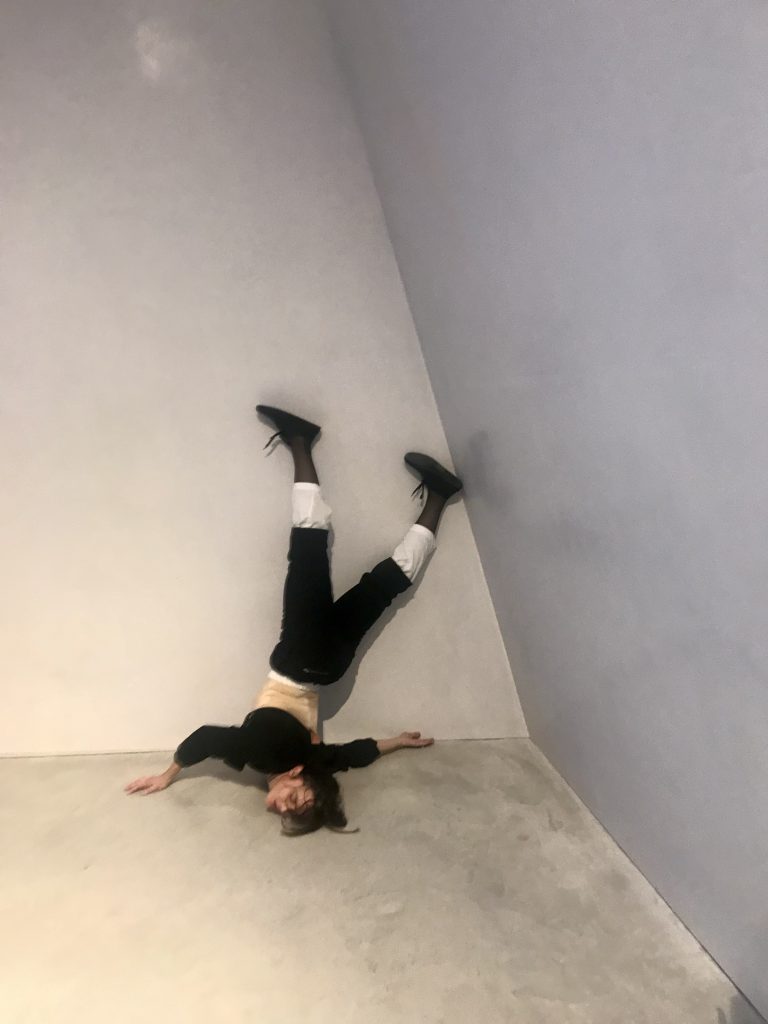 LP: From the second performance during the afternoon, you chose to immediately state the need to shift the point of view of the spectators, going closer and closer to the audience. Eventually you integrated them into a relationship with the design of your body in space. What was that like for you?

AA: Actually, I didn’t plan the interaction with the public, sometimes it can be a mistake to imagine beforehand how it’s going to happen. I think one of the most important dynamics at stake when it comes to performativity and dance is that specific tension that drives you to look for confidence with the external situation; and trying to carry it elsewhere with a “prehensile body” that gives voice to some thoughts… that I really can’t name… and of course feeling pleasure in what you’re doing is key! That’s how it was at the Teatrino. I didn’t expect the audience to sit down and create a circle around an empty space as if to show me the place of the performance. So I immediately felt the urge to break the observation setting. It was a lot of fun to investigate the different levels of proximity by gently pushing it to move.
The timer on the phone was used because I wanted a defined end, so that I wouldn’t fall into the temptation of drawing it. In the second intervention, at 4pm, I used the phone to play music from a corner to encourage a shift in perception of space. For the 2nd outfit, it was great because Fabio and I decided to break the initial idea and composed it 3 minutes before the start in relation to the previous experiences.
The last sweep at 6:30pm was more random and definitely enjoyable. The fact that I was probably tired made me appreciate the change of rhythm. I didn’t have time to start something and immediately shifted its composition. 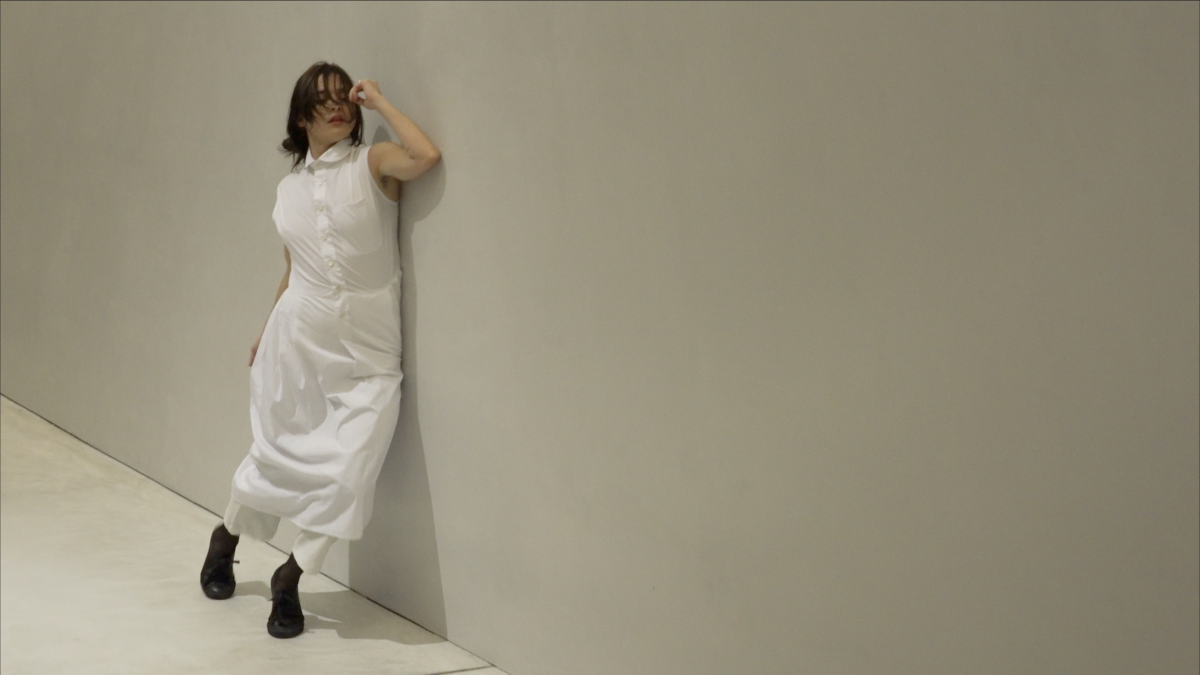 LP: Since we’ve known each other for a few years, I know that during the second lockdown, you spent a longer period of time on the Venetian island and you come back often to meet with the lagoon community. So I was wondering if and how your paths of work and reflection have changed during the last two years of the pandemic. For example, where did you compose the material that weaves the performative dimension of your last production titled La notte è il mio giorno preferito?

AA: Towards the end of October 2020 I left Milan for Venice because I had a few days off and a lot of friends were talking about a magical city without tourism… indeed I met a semi-deserted space where you could hide, which is both beautiful and a bit comforting. Once the second lockdown started, and I couldn’t leave for Rome, I stayed here for a whole month. I felt lucky… I established a network of very stimulating relationships that definitely influenced my work. During that period I read and wrote a lot. I also began distance learning with Stella Succi, who was in charge of the dramaturgy of La notte è il mio giorno preferoto. I made some preliminary skype calls with Veronique Ferrero della Coste, former director of the “Far di Nyon (ch) Festival.” Her support was crucial to the development of my ideas which were still in the form of intuitions. However, I was already sure that I wanted to talk about communication between different creatures and I told Veronique that I was reading Sur la piste animale, a book that Ilenia Caleo had recommended to me. Baptiste Morizot’s text was especially important where he talks about “tracking”: the practice used by ethologists to control the quantity of animals, in our search for wolves, present in a certain territory. Veronique and I thought that this practice would be the ideal one to start working on. Tracking another creature, it seemed to us a way to “follow other paths,” to experience other ways of communication and perspectives in order to infra-act with different ecosystems using some degrees of distance from the anthropocentric gaze…

LP: How did you and your collaborators develop this idea of “tracking” into the ecosystem of the scene for la notte è il mio giorno preferito?

AA: We organized a tracking in the Jura territory in French Switzerland with Jan Marc Landry, an ethologist who is also involved in wolf advocacy in that area. Tracking began in September 2020, (in March we had another residency for the preparation) and together with Stella Succi and Natalia Trejbalova, who took care of the image and the set for the show, we began collecting data on sightings with cameras, but especially with nighttime stakeouts. Those practices hold many fascinating aspects. The most amazing thing to me was the encounter with the night and with waiting… a kind of waiting for an apparition that in the end might not come, gave me the opportunity to listen to a particular silence… I also learned some calls… for example, I know how to howl, or at least I think so… We didn’t see the wolf, but as Stella says, maybe that was lucky! The writing of the show didn’t always run parallel to the theoretical or field research. On stage I re-mediate the processes of encountering other languages, I would say, by embodied approximation. For example, the “tongue dance” in the show, as well as being one of my usual ways of researching, is related to some degree to woodpeckers’ tongue, the place their sense of touch is located…

AA: I would say that, as usual, there are various things that affect my research, but, technologically speaking I have an issue with orientation that somehow is analogous to tracking and exploring. I realize that often, especially in simultaneous composition, I need to orient myself and to draw my coordinates first at least in broad strokes, otherwise I lose confidence in processing the gestures. Just today I was thinking that perhaps the moment will come when I will decide not to write the space anymore, not to have it “a priori.” My dances today are driven by the desire to question myself and continue to break through my comfort zones to stay open to what might come, but also to what could disregard expectations, as during il mio giorno preferito… 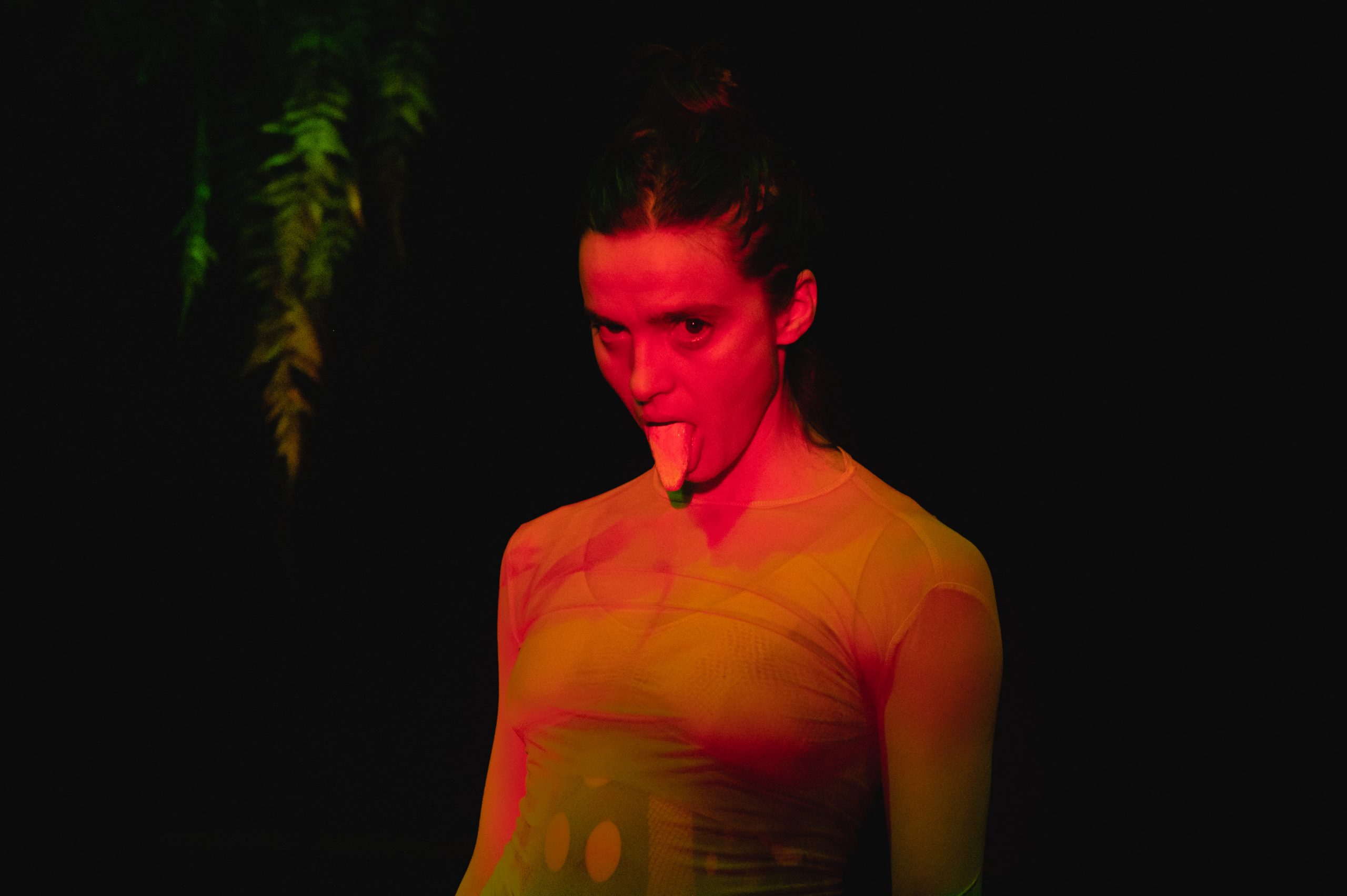